Let’s talk about the pros and cons of pop-up emitters. They’re the number one choice for discharging downspouts, French drains or anything drainage because they don’t hold any water. It’s just a little elbow, so it doesn’t hold any water. A basin, on the other hand, holds quite a bit of water and that could be a problem if you’re trying to get that to leach into the subsoil after the rain event. You can drill some holes in a pop-up emitter, and you could drain that out pretty easily.

Problems with Pop up Emitters

All right, now let’s talk about the first problem with pop up emitters. The cons are definitely the way manufacturers build these pop up emitters. Whether they’re spring loaded or not, in the center, they have a hub and then you can see they have spokes going off to the outer rim of this pop-up emitter. You can see how now you lose this big opening. What happens, leaves, branches, pine cones, things like that, they can’t get through there without getting hung up.

Here’s an example. You can’t get a pine cone through this. That one’s not a spring. That one happens to be melted plastic, not a fan of these at all. They’re cheap, weak, and you could see you can’t pass even a simple pine cone. 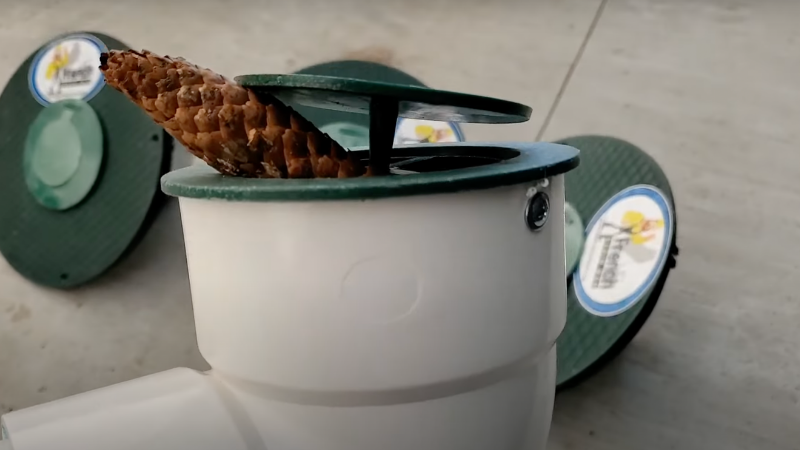 That’s why you do not ever want to use something like this. This is great for venting. I see a lot of people use these. I don’t recommend them because you’re never going to get leaves or anything through them for discharging.

Now, the pop up that we prefer because it’s made to where it doesn’t have those bars. It’s pretty cool actually. You’re going to see just an amazing large opening. We drilled a few holes. You can see the holes drilled in the elbow at the bottom. Again, this is a small elbow right here. You can see that that’s not going to hold very much water. You drill holes in the bottom. That’ll leach in the clay. Yes. Clay will leach a few glasses of water. No problem. That’s why it goes from hardly concrete to mud. So you will get it to leach some. After a couple of days, there will be no more water in this line. That’s what’s nice. So a real big opening pop-up. 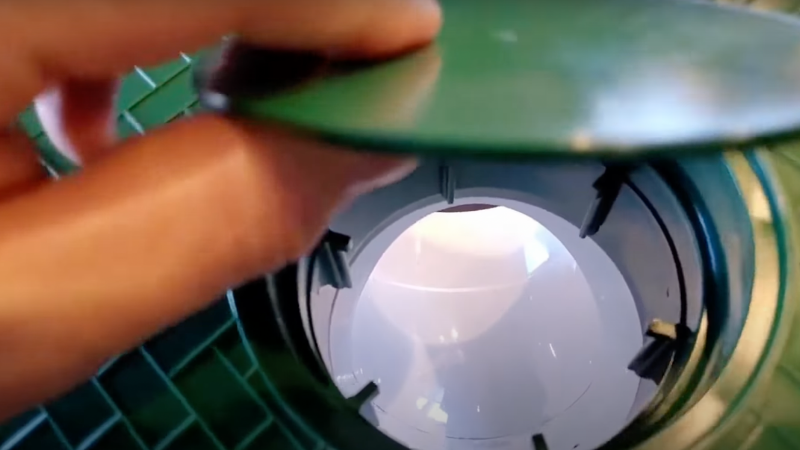 Now, the other thing I don’t recommend is using lawn pop ups that don’t have something to help restrict the grass from growing over it. The grass grows right over top of these so fast. It’s a number one reason why basements flood. Grass growing over top of it. The pop-up emitter is the best tool for ending your line, your drain system of any kind. It’s definitely the go-to.  The problem is grass grows over it. That’s why we went ahead and we put this large plate around the pop-up called a turf restrictor plate. Check it out here: