After 35 years experience as a downspout drainage contractor in Michigan I knew there had to be a better way to discharge water. This is why we designed a new pop up emitter – out of pure necessity.  Pop ups are the best choice for downspout drainage because they hold the least amount of water. However the grass quickly grows over the pop up clogging the point of discharge.

Basins on the other hand, don’t have a problem with grass growing over them but they hold too much water. This is extremely problematic in Michigan during the winter season and the basin becomes a block of ice. There had to be a better way.

This is what led to us designing the world’s first and only indestructible pop-up emitter. It can’t be broken. It will not crack. It will not break. And grass will not grow over it. 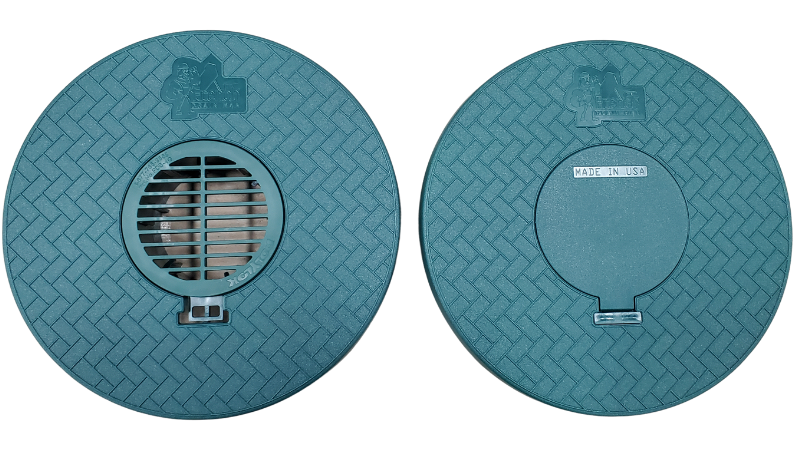 Developed by Drainage Contractors. Made in Michigan.

Our pop up is made by the very same people that design and build automobiles. We’re located in Michigan. That’s where French Drain Man headquarters are. Lucky for us, because it’s Automotive Alley, we have engineers, plastic mold injection, die-making. We have it all right here. The convenience of being able to make our pop up locally right in our home state of Michigan and keeping all that work here in the United States of America, not taking any of it to China, and that means we’re always employing United States workers. We’re keeping the money here in our home state.

A Game Changer in Drainage: The Turf Restrictor Plate

This is a very unique pop up emitter because it was designed by drainage contractors. It has a 12 inch turf restrictor plate that is indestructible. It cannot be broken. Trust me, we put it through its paces. It’s overbuilt. In my 35 years as a contractor, there has never been a pop-up for discharging that would hold up to a big, heavy lawnmower. Now we have one.

Now, the lid, we had them make that as big and as open as a four inch PVC pipe. This means that pine cones, leaves, needles, branches, all can come out the pop-up because we have a discharge that lets all that debris out. The reason why you have plugged, clogged pipes is because other pop-ups will not let them daylight.

Another benefit is you can use our turf restrictor plate with a pop-up or  you can take the lid off of it. Then any manufacturer with a four inch drain plug will fit right in the center.

Perhaps the biggest advantage of the turf restrictor plate is  it keeps the grass from growing over it and the pop-up from disappearing.